It’s official, Donald Trump is the 45th President of the United States yet the markets seem to be at an interesting crossroads. We’re seeing the markets reconsider the post-election Trump rally as much of the prospective benefits of new policy have already been priced into both equity and bond markets around the world. In the immediate aftermath of the election domestic stocks rose alongside bond yields as many around the globe anticipated that Trump’s mix of fiscal stimulus, tax cuts and other pro-growth policies would bolster the US economic situation and lead to further prosperity. In a classic iteration of “buy the news, sell the story”, the markets now seem to be questioning Trump’s ability to implement his grandiose plans as recent confirmation hearings have proffered minor clues on this administration’s agenda alongside of some conflicting rhetoric from Trump himself. The catalyst for the recent rally: tax cuts, regulatory rollbacks, infrastructure spending, inflation and jobs, jobs, jobs and more jobs. All these promises, and yet it took just a single press conference for markets to reconsider their recent bullishness. Interestingly enough, it seems each time Trump speaks the markets react similarly and the bullishness shows a bit of a wobble.

In the study of human psychology there’s a fascinating term called “cognitive dissonance”, whereby an individual exhibits stress or discomfort as a result of holding two or more contradictory beliefs, ideas or values at the same time. The hype and high-energy rhetoric espoused by the Trump campaign is finally causing markets to second guess the likelihood any such policy changes will be enacted, as well as how large or small their effects may be on a US economy that finds itself in the later stages of a recovery. Equities are priced with high valuations on expectations that earnings will increase in coming years, but longer-term bond yields remain wary of any such promise (10yr Treasury yields sit at ~2.50% while core inflation was last reported at 2%). The winner of the stocks versus bonds debate will be interesting to watch.

Meanwhile, the Fed continues to be a focal point, albeit less so than in recent memory. Chair Janet Yellen reemphasized last week that the central bank expects to normalize rates throughout the coming years, eventually leaving the fed funds rate near 3% by the end of 2019. Considering we’ve already seen two rate hikes, one in each of 2015 and 2016, and this implies a rather glacial pace towards normalcy, something the markets will have to reconcile as Trump pushes for pro-growth/inflation initiatives. Should the two powers-that-be get out of alignment this could spark further inflationary pressures, likely to be reflected in the markets as inflation expectations take hold. On that note, last week’s auction of 10-year Treasury Inflation Protected Securities (TIPS) drew record demand from indirect bidders, a group that includes foreign central banks and mutual funds. This contingent took down 77% of the $13 billion auction, well above the roughly 66% historical average. The appetite for inflation protection could continue to see strength as markets will wrestle with the uncertainty regarding Trump’s policy initiatives with the backdrop of a more hawkish (pro rate hike) Fed in 2017.

Here’s something to keep an eye on moving forward: the bond markets are showing us that policy uncertainty (both monetary and fiscal) is becoming, for lack of a better phrase, more certain. As uncertainty rises, the intermediate potion of the yield curve, 5- to 10-year maturities, tends to rise more relative to the front and back-ends of the curve. As a result of this uncertain situation, the 5s30s curve, the difference in yield between the 5- and 30-year maturities, has declined to the lowest levels since the election. This is odd considering recent inflation data, and the TIPS auction mentioned above, clearly indicate expectations for rising inflation in the coming years. 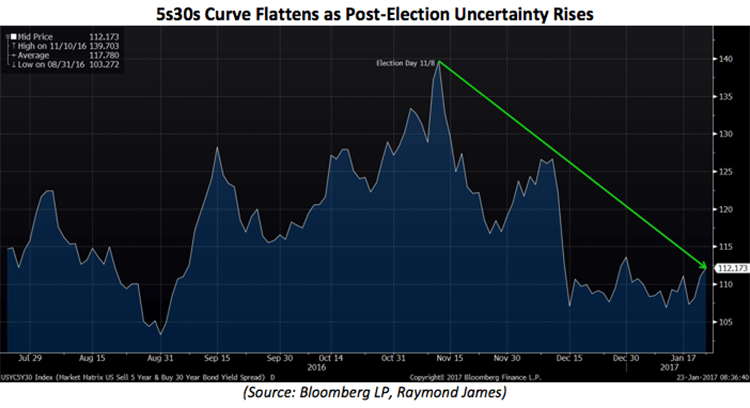 All eyes on Friday

Talking about last week or this week seems like an exercise in futility. It seems like the calm before the storm and that the economic releases, Fed member comments, global interest rate disparity, OPEC declarations, last ditch efforts from the current administration, etc. have limited impact. Simply, all focus lies on Friday when Mr. Trump becomes President Trump. Friday marks a new beginning and different approach to U.S. politics. One might say we are shifting from an era of politically motivated decision-making to a more business-like approach. It makes no difference where you stand politically or whether you support or dislike the platform. Either way, judging by the campaign promises and the cabinet nominees, we are in for changes which include potential influential market transformations: a move to energy independence, a shifting Fed member composition, a locked-in conservative supreme court, an American-friendly business philosophy, de-regulation and tax-incentivized adjustments for corporations and individuals.

The bond market has calmed down in anticipation of what really amounts to a lot of unknown. How many of these campaign promises will come to fruition? How receptive will congress be with their support? How long will it take these changes to filter through and affect the economy? The end of last year pushed yields dramatically up in hope. Since the beginning of the year, we are experiencing a subsiding of the excitement. The reality is, even under the best conditions, it will take years for changes to take shape. The bond market players should understand better than most that this is not a game of moments and instant conversions but formed and measured over years.

Change will be glaring in 2017

It can be surmised that rates ended the year slightly higher based exclusively on our national election. There was no significant difference in economic data, inflation, wages or any other economic identifier but the significant difference appeared in the change from a nation run by career political figures to the incoming ideal that it will now be run by business people. The take-away seems very evident: nothing will be the same. Change, whether deemed positive or negative, is on the way. The 2017 economic realm certainly stands to be transformed.

OPEC seems to have a quarterly decree for cutting production and the most recent proclamation gave oil another price boost. Typically, this play is dismissed when one of the players decides it’s not worth losing market share; however, a greater force is shaping the energy world. The change here is that the U.S. is poised to be a net “exporter” of oil rather than “importer”. Much is set to play out in 2017 and the upcoming years.

The U.S. central bank, commonly referred to as the Fed, has been run by academics. It can be assumed that 2 slots to be immediately filled by Trump will go to business individuals. Chair Janet Yellen’s term will end in February, 2018. Another immediate impact will occur with the Supreme-court appointee where Trump has pledged to stick with a list of conservative nominees.

Looming over all these domestic changes is another enormously impactful change: the euro-zone and its survival or at least its composition. Germany’s vice chancellor just recently said that a euro-zone break-up is no longer inconceivable. The United Kingdom started the reality. Upcoming elections in France and the Netherlands have similar tones to the U.S. election with the “out with the old, in with the new” mantra.

It is always difficult to prognosticate but one thing seems certain entering 2017. People and nations are clamoring for change and this year can be expected to deliver.

The author of this material is a Trader in the Fixed Income Department of Raymond James & Associates (RJA), and is not an Analyst. Any opinions expressed may differ from opinions expressed by other departments of RJA, including our Equity Research Department, and are subject to change without notice. The data and information contained herein was obtained from sources considered to be reliable, but RJA does not guarantee its accuracy and/or completeness. Neither the information nor any opinions expressed constitute a solicitation for the purchase or sale of any security referred to herein. This material may include analysis of sectors, securities and/or derivatives that RJA may have positions, long or short, held proprietarily. RJA or its affiliates may execute transactions which may not be consistent with the report’s conclusions. RJA may also have performed investment banking services for the issuers of such securities. Investors should discuss the risks inherent in bonds with their Raymond James Financial Advisor. Risks include, but are not limited to, changes in interest rates, liquidity, credit quality, volatility, and duration. Past performance is no assurance of future results.